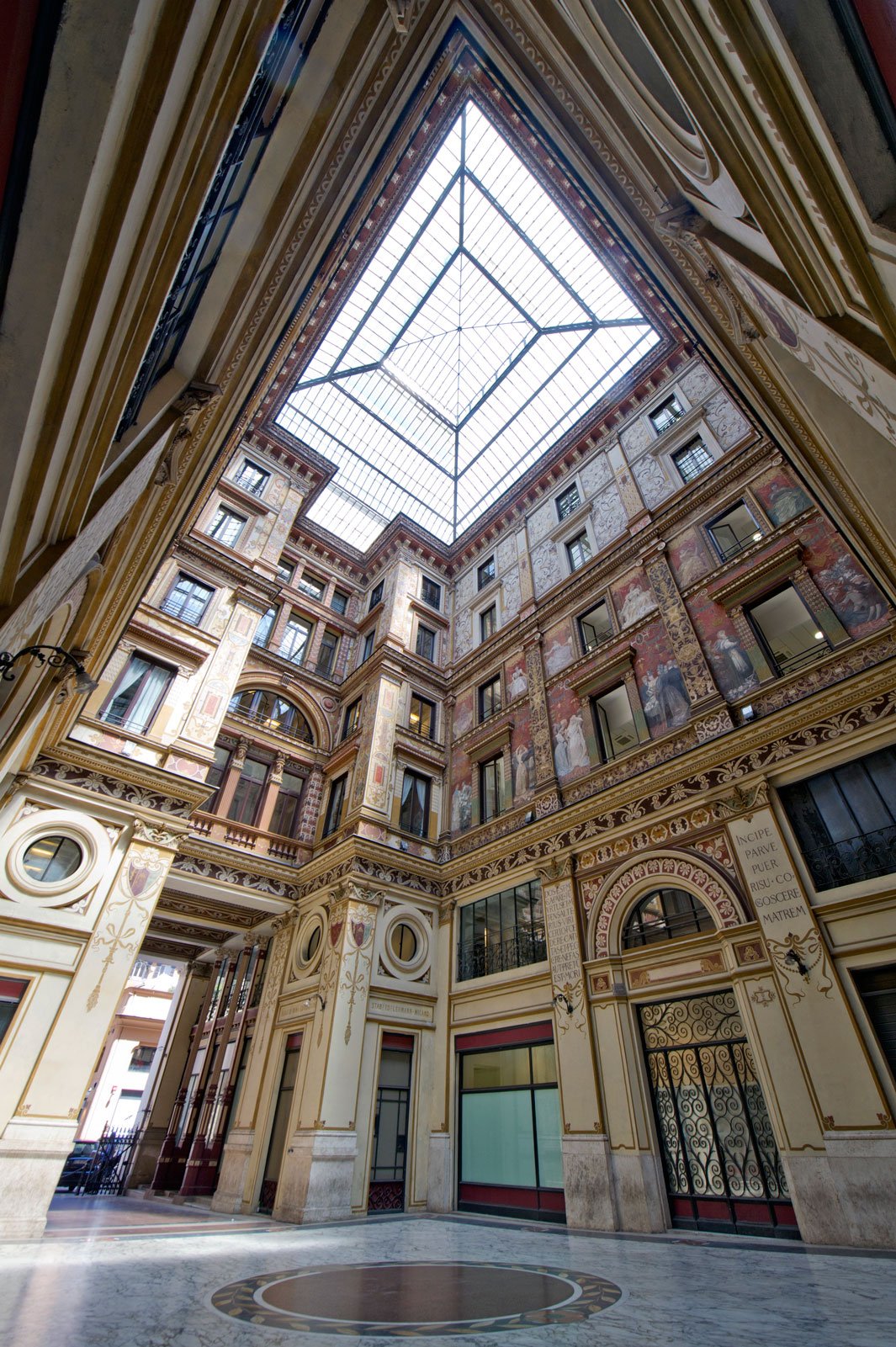 Not only classical and Roman art. Not only Renaissance art. If you are near the Teatro Quirino, (a few steps from Via del Corso) Rome will surprise you again with a magnificent example of Art Nouveau.

We are talking about Sciarra Gallery, located in the Trevi district, known as Sciarra Gallery because it is a covered pedestrian passage, with the entrances in Via Marco Minghetti and Piazza dell'Oratorio. Located in the historic center of Rome, the structure of the Gallery dates back to 1888 and it was born as an outdoor courtyard of Palazzo Sciarra Colonna di Carbognano.

The works of the Gallery began in 1886 at the behest of Prince Maffeo Sciarra, who decided to transform his home, on the occasion of the inauguration of the building, as the headquarter of the cultural magazine "Cronaca Bizantina", of which he was the owner and Gabriele D'Annunzio the director.

The project was entrusted to the architect Giulio De Angelis, who designed a cruciform pedestrian courtyard. Particularly interesting in the use of cast iron in new buildings, this material was used in the beautiful columns typical of the liberty style that embellish the whole structure. The rich decorations by the painter Giuseppe Cellini extend on all 4 facades of the courtyard, covered by a dome in iron and glass. The decorations, made of terracotta, mix different styles. Cellini reworks Greek and Etruscan archaic motifs and composes them with Renaissance drawings, accompanied by oriental and Egyptian reminiscences. 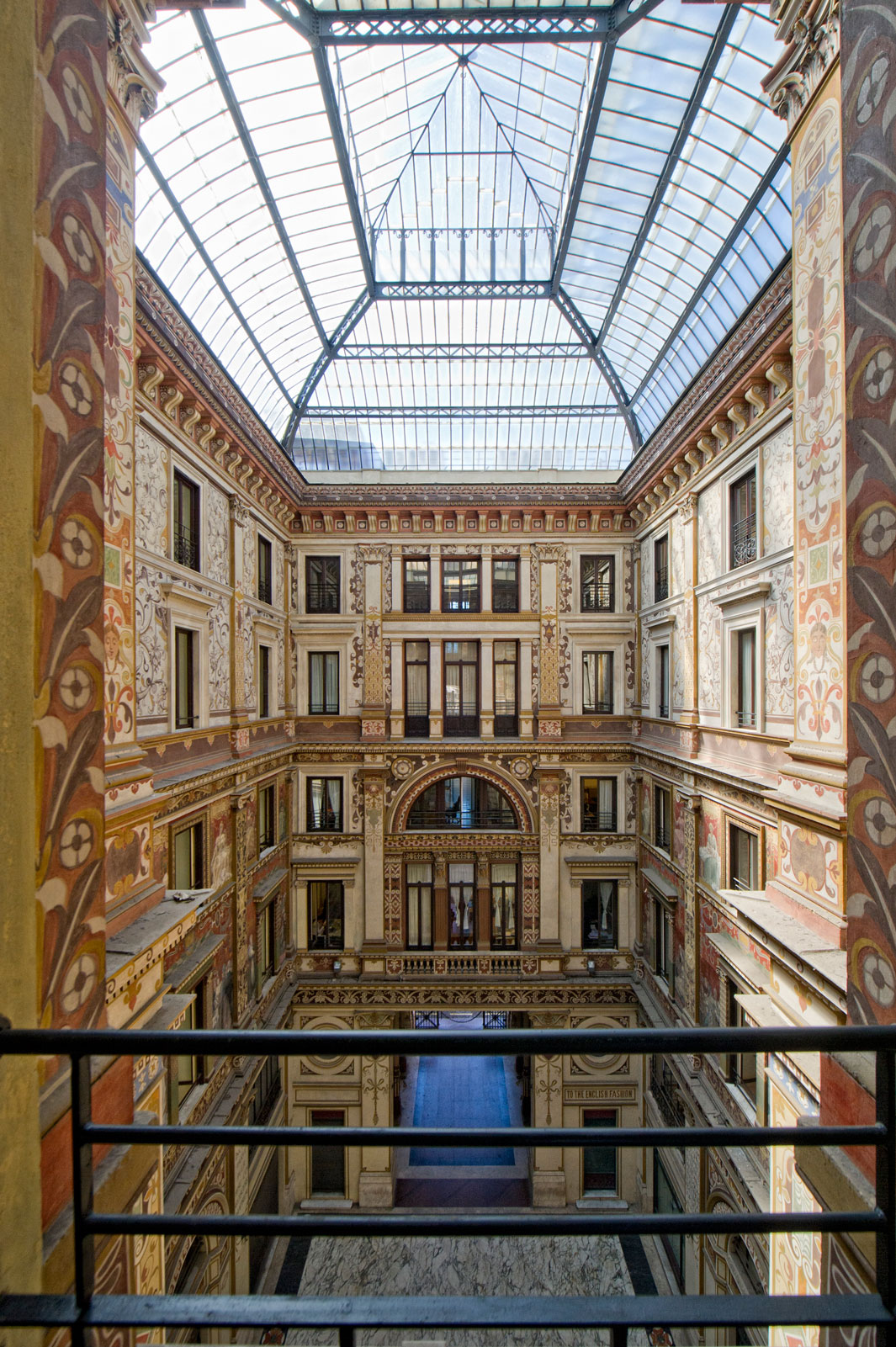 The cycle of frescoes on the facades celebrates the figure of women according to the canons of the time and the various female virtues. They illustrate in fact the various models of feminine virtues such as " The Modest", "The Sober", "The Strong", "The Humble", "The Prudent", "The Patient", "The Benign", "The Lady", "The Faithful", "The Lovable", "The Merciful", "The Fair" and represent scenes of everyday bourgeois life.

These elegant women are a heartfelt tribute to Carolina Colonna Sciarra, mother of Prince Maffeo, as shown by the acronym (CSS, the initials of her name) embroidered on a shield over the entrance to the gallery, next to the family coat of arms.

In ancient times, in the area occupied by the gallery, there was the Porticus Vipsania, built by Vipsania Polla, sister of Marco Vipsanio Agrippa (who owned a villa in the surroundings). As a whole, the Sciarra Gallery shows a double soul, in step with the times in the use of large glass surfaces and iron elements, more nostalgic and classical in the rich decorative apparatus and architectural forms.

Unexpected art nouveau jewel, it is a must for lovers of this style and for all those who want to be transported to another age.