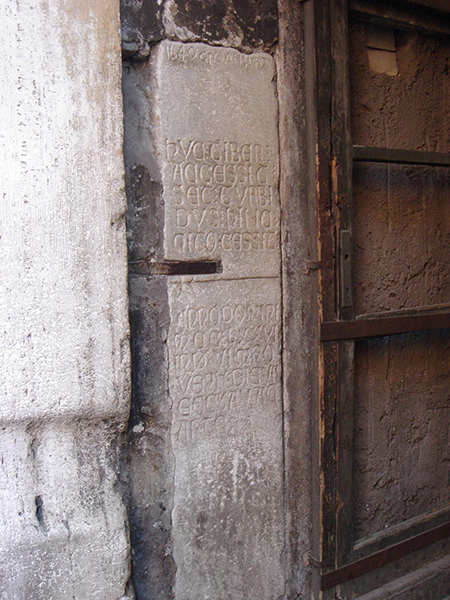 Another little-known place in Rome is the Arch of the Banks, in the Santo Spirito area. A short subway that hides a wonderful starry ceiling. The particular name of this arch derives from the 'banchi' (banks) where notaries, financiers, bankers and merchants conducted their business, taking advantage of its proximity to St. Peter's, during the 15th century, as it was the connecting route between the city of Rome and the Vatican. Among the most illustrious financiers of the time is Agostino Chigi 'the Magnificent', who carried out enormous financial activity here, bringing lustre to the entire S. Spirito area. Indeed, he was the treasurer of the Church, had trade relations with the whole of Europe and controlled the expenses of the Borgia wars, the exile of the Medici family and the expenses of Pope Leo X.

In those days there must have been a lot of activity around here, but today it is a quiet, hidden passageway that is barely noticeable. However, if you enter the arch from the Via Paola side and come out onto Via del Banco di Santo Spirito, you will find yourself in front of one of the most beautiful views in Rome, that of Castel Sant'Angelo.

Via del Banco di S. Spirito was also known as the 'Canale di Ponte': the name perhaps derives from the fact that the great mass of pilgrims coming from the surrounding streets would 'channel' themselves into this narrow stretch of road to cross the Sant' Angelo bridge and go to St Peter's, or, more probably, because of the flooding of the Tiber, which as soon as it rose in level immediately invaded this short route.

In this regard, a very interesting curiosity lies in the inscription at the entrance to the arch: at the bottom is a stone embedded in the wall that bears the date 1277 with an inscription recalling the flooding of the Tiber that hit the city in that year, showing the level at which, the water rose.

Furthermore, the Arch of the Banks retains a mystical and at times peaceful atmosphere because in the 16th century there was a much-revered sculpture of the Virgin under the arch, which was later removed and then replaced in the 19th century by a large oil painting, also depicting the Madonna. In days gone by, this was the only point of the arch to be illuminated, and consequently the image of the Madonna was a reference point for all visitors and pilgrims on their way to the Vatican.